Diversity A Powerful Force Against Harassment in the Workplace

Recently, at the Inclusion in the Workplace Summit, Lenovo and The Atlantic hosted poignant conversations with leaders across industries about some of the barriers keeping women from advancing at work. We spoke with Sharyn Tejani, Director, TIME’s UP Legal Defense Fund, about how sexual harassment impacts women’s efforts to increase equity in the workplace.

Most people think of sexual harassment as unwanted physical touching, but it encompasses much more than that, right?

It can be little things, like you speak up at a meeting and no one listens to your ideas, but when the man says it everyone is listening to it, or you’re not invited to certain things. Or it can be much more serious, like saying flat out loud that women don’t belong here or can’t do this kind of work.

Talk to us about how harassment can lead to more systemic barriers for women, like the gender pay gap.

Traditionally male jobs pay more than traditionally female jobs, so if you can breakthrough and be in one of the traditionally male jobs, you’ll make more money, advance farther, have more money for your family, you’ll buy that house, your kids can go to that school… so all of those things are stopped because of sexual harassment. We know that sex harassment is very prevalent in these types of jobs. The few women who do get into them are often pushed out by harassment.

Is there concern about false reporting?

How can diversity be a powerful force to combat harassment?

Sexual harassment at its core is really about power. Once you have a more diverse leadership group, diversity in your supervisors, diversity in your workforce, you’re already sharing the power and decreasing chances people will make this club which excludes people or treats them in a different way.

This is part four of our series on Diversity & Inclusion in the workplace. Read the others here. 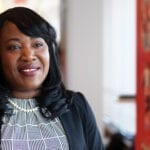 Part of creating inclusive work spaces means first recognizing that everyone has a story—a story that starts at the intersection of race, gender, religion, sexual orientation, disability, and more.