Editor’s note from Lenovo’s chief communications officer, Torod Neptune:
Advancements in today’s technology and devices (AI, computing power, data and more) are giving hundreds of millions of people worldwide more opportunity, greater connectivity, and the ability to transcend historic and cultural limitations. This change and empowerment of people through technology is what we at Lenovo call intelligent transformation. Throughout the next year on Lenovo StoryHub, we’ll hear the unique perspectives from people around the world who represent intelligent transformation in their own way, and learn what it means to them, and how it comes to life in their world, through their work, to better society. – TBN 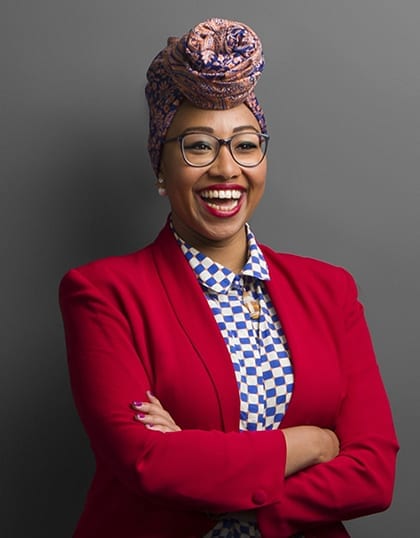 Technology has the ability to transform and redefine the way society operates. Not all transformation is made equal, however. Intelligent transformation occurs when we begin to realise the positive potential of technology; when we use it to create and sustain meaningful human connection, strengthen the bonds of empathy and make our environments healthier, inclusive and safe for all.

My personal journey is one of the many examples of how technology can have a positive and transformative impact. If it weren’t for the global reach of the internet, you wouldn’t be reading this piece today. A young Muslim woman, born in Sudan and brought up in the medium sized city of Brisbane, Australia: how would my words have reached you?

In many ways, it started small; blogging on Tumblr, educating myself via YouTube and developing my voice through Twitter. At 16, I started a youth organisation, Youth Without Borders, and we relied heavily on email, online newsletters and Facebook to reach our audience – these tools were free for us to use, and highly effective at engaging our audience. Whether it was mobile libraries in Indonesia or an engineering camp for young students from marginalised backgrounds across Australia, the connectivity that the technology provided us was a key enabler of positive change.

Things began to ramp up after my TEDx talk on unconscious bias, originally performed in my home town, was recorded and picked up by the global platform, allowing it to take on an entirely new life. What Does My Headscarf Mean to You was translated into 31 languages, viewed over 2 million times all over the world and eventually utilised in countless training programs and university lectures around the world on the topic. I’ve now presented on the impacts of cognitive bias and ways to tackle it in over 20 different countries, including the United States, France, Norway and Singapore. The talk, which incorporates an effective ‘reveal’ to illustrate the point, was also one of the first pieces to address unconscious bias on a mainstream platform outside academia; capturing the zeitgeist and becoming a powerful part of the wave transforming the ‘inclusion’ approach in workplaces globally. This example also demonstrates the impact of online sharing, the newly developed ways of storytelling, and the possibilities that are opened up when we can connect with the people behind the content being created.

It is largely thanks to these technological transformations that people like me, are able to learn, collaborate and have the global positive impact on society in ways that were never possible before. Many of us have been locked out of traditional opportunities for generations, so it is exciting to live in a time when the status quo is so rapidly changing. The benefits also extend far beyond the individual: social media platforms are now regularly used to alert the public about human rights violations of all kinds. I was involved in a particularly emotive case earlier this year, where a Sudanese teenager was on death row after taking the life of her husband in self-defence. The story is sadly, not uncommon: the young Noura Hussein was forced into a marriage and subsequently raped, and as martial rape is still legal in Sudan, she had few avenues for protection under the law. This time was different: Noura’s story was shared on a friend’s Instagram page, and myself and a few others began campaigning for the young woman, pushing for a successful appeal to the sentence. Under the hashtag #JusticeForNoura, and through an online petition which garnered almost 1.8 million signatures, we were able to support a legal process which reduced Noura’s sentence to five years and set a precedent that will hopefully see the laws changed at some point in the future.

There are many examples of activists and changemakers using technology to push for positive social change in ways that are truly revolutionary and unprecedented. Today, there are so many campaigns and hashtags on social media that are invigorating and reinvigorating movements against things like sexual harassment, racial inequality and school shootings.” We are seeing intelligent transformation impact society as companies are held more accountable for their actions, through technologically-enabled social pressure. Consumers are empowered to demand better practices from businesses, often voting with their feet (or clicks!). Citizens are becoming increasingly engaged in civic conversations, galvanising around issues that they care deeply about through online petitions, homemade videos or even something as simple as a politically charged meme. We are only beginning to understand and realise the implication of these changes, and the potential is truly limitless.

Whether it’s tackling prejudice through new ways of storytelling, designing algorithms that do not replicate the offline biases online or simply creating avenues for individuals to learn about each other: intelligent transformation will play a key role in creating a safer, healthier and inclusive world for us all. I can’t wait!