Life in Lugoff: Fix PCs, Bartend, Get a Lenovo Tattoo

If you find yourself drinking a pint under the warm string lights of a bar in Lugoff, South Carolina, you may notice an unusual tattoo emblazoned on the bartender’s right arm. Past the milkshake, weasel, and penguin sits a freshly inked Lenovo logo.

Joe McLeod, an IT consultant who moonlights behind a bar, recently added the tattoo to an ever-growing collection of at least 25 on his body. McLeod is not a Lenovo employee; he runs his own business, working with businesses and individuals who use all makes of PCs, servers, and accessories.

So what makes Lenovo special enough to inspire a tattoo? And what’s the IT scene in small-town South Carolina? Not everyone is diving headfirst into Intelligent Transformation, and McLeod helps bridge the unavoidable gap between those on the cutting edge and those still wary of the future.

We talked to McLeod about his passion and experience, from PCs buried in second-hand smoke to retrofitting a machine to run 20-year-old software.

Hey, Joe. What’s the high-level breakdown of your IT business?

I am a one-man operation working out of the house to do onsite PC repair, data recovery, network troubleshooting, and, my favorite of all, security—or at least I try to encourage security awareness. I have between 25 and 30 regular clients, a majority local business, and a few individual clients that I work for on an on-call basis. 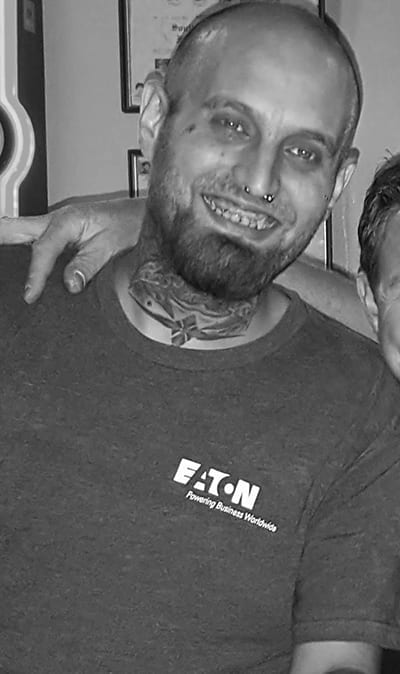 Let’s wind back the clock. How did you first get interested in tech and keeping things running?

My family got our first computer back in the early 90s. It was a 486DX2 66Mhz AST desktop complete with AOL, and Windows 3.11—a lot of terms that don’t mean much anymore. I upgraded later to my first laptop, which was a Toshiba Satellite 486/66 with a 9″ screen and probably weighed in at 12 to 15 pounds. My cousin got me interested in learning programming languages, but I never made it far, and until recently never really wanted to learn much programming. I got onto Internet Relay Chat—IRC—in my teen years and throughout high school, and that got me into Linux. I even ran my own IRC server for around eight years or so.

I remember chatting with folks around the world back in the heyday of IRC—feels like another era! What do you like about fixing things or helping people through IT obstacles?

Most of my time is spent fixing routine issues or performing routine maintenance, but every once and a while I’ll run into something that is a bit more challenging. I like to be able to fix what really causes problems without the standard “format and reinstall” answer that a lot of technicians use. There isn’t any better feeling than leaving all data intact, fixing the problem, and helping the client continue with business without unneeded interruption. I also like providing clients with cost effective solutions that provide scalability, so that if they stay the same size it works, and if they overnight add 10,000 clients, the same solution will still be applicable.

You do this now in the bustling metropolis of Lugoff. How do you like it there? What’s it like being a one-man band in the world of bigger service and repair shops?

In high school I hated it, but now that I am older, I really like living in a small town. Traffic isn’t ever horrible, I can get things done around town without tacking on a whole bunch of stress, and I am just a few hours away from several large cities. I have mostly business clients, but I’ve also been known to help people at the bar with computers, TVs, and cell phones. 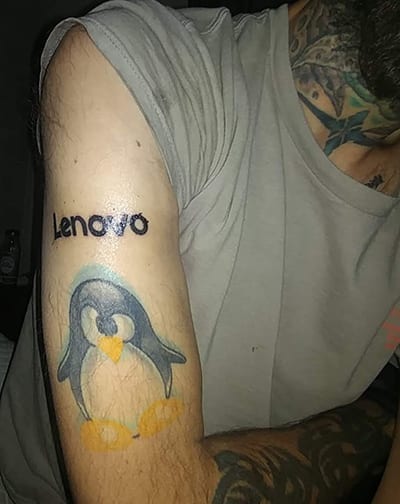 What distinguishes Lenovo for you? You usually encounter tech when it’s failing, right? That gives a unique lens.

I’ve had far less catastrophic incidents with Lenovo hardware versus others—some other companies’ gear even has issues right out of the box. Lenovo has helped me along the way in making better purchase recommendations than my competitors make for lifespan, ease-of-repair, and scalability. Overall, out of all of the manufacturers I’ve dealt with, Lenovo seems to be the best value for a good quality build that I can truthfully recommend without having to worry.

Let’s talk about some of those customers. Who stands out?

I’ve got one client that smokes pretty much constantly in the house, at least two and a half packs a day. And the house is pretty dusty, which always leads to great internals. She rarely cleaned the computer fans, and I would go over and blow the dust out of the inside once or twice a year. Over the course of about eight years, I think we lost one power supply, but the computer ran strong through all the smoke and dust. She has a new Lenovo PC now, which gets the privilege of battling that environment.

You mentioned a jeweler working with some very dated software. What was the challenge there?

He’s an older man who uses a specific piece of software for appraisals that he has been using since DOS 6.22.

Just looked it up, and we’re going back to something launched way back in 1994.

He didn’t want to sink another $3,000 into software. This will get a bit technical, but there’s no way around it. The first time I walked in, he had a 386 running this software on DOS and the BIOS battery had died. I looked up the price on a new battery, which was $20, and I told him I wouldn’t give him $20 for the computer. So we set out to find another solution to run the existing software on a new PC. At this time Windows XP was standard. I ended up running a virtual machine on that PC, running the old software through DOS. We migrated that set up to a Lenovo PC, which worked for at least seven years. The current configuration is a DOS emulator with another third party application to print to an old dot matrix printer. Overall he’s saved more than half of what the software upgrade costs, and it works for him.

That’s a very customized solution—setting up a new PC to run ancient software. What about the construction company you work with?

This is one of oldest clients, and I’ve kept them going with Lenovo products for 10 years. Don’t get me wrong, we’ve had some of the inevitable issues, but we’ve also prepared for those over the years. If something is going to fail on a computer over the first five years, it’s probably going to be the hard drive. So I usually recommend that people buy and use external hard drives. My database teacher in college once said, “Backup, backup again, and then back up again.” I’ve run into some pretty disastrous situations with inadequate or no backups, so I try to push that message. There isn’t any way around some hardware failures and it’s just part of daily computing. Overall, as far as problems that interrupt a big business, they are few and far between with Lenovo products.

And that performance and reliability motivated the tattoo?

Of course. I definitely wouldn’t go for another brand.

How have people responded to seeing “Lenovo” on your arm?

People love it, and I love it too.

Far from your first tattoo, right? Any other favorites?

I lost count around 25. I was into piercings through high school. My first piercing was my septum when I was 16 years old, and definitely still the most painful of them all. After that one I got my lip done seven times, labret, upper lip, eyebrow four times, bridge of the nose twice, and a few others. Those are all long gone. The only one I can actually still get in is the septum ring, and I think of that one as more of a trophy than anything else. My brother was big into tattoos, and when he passed away in 2010 I started adding a lot of new work to my ink collection. I’ve got a lot of randomness, my cartoons, and of course my geeky ones like the Kali Linux Logo and Tux. My favorite, and it doesn’t look really good, but I knew it wouldn’t going into it, is my Rolex tattoo. The two that get the most reaction are the CONFIDENTIAL stamp on the side of my head and the one on the other side that looks like it’s cracked open with a brain exposed.

Definitely some bold choices there. How does bartending counterbalance the IT work? 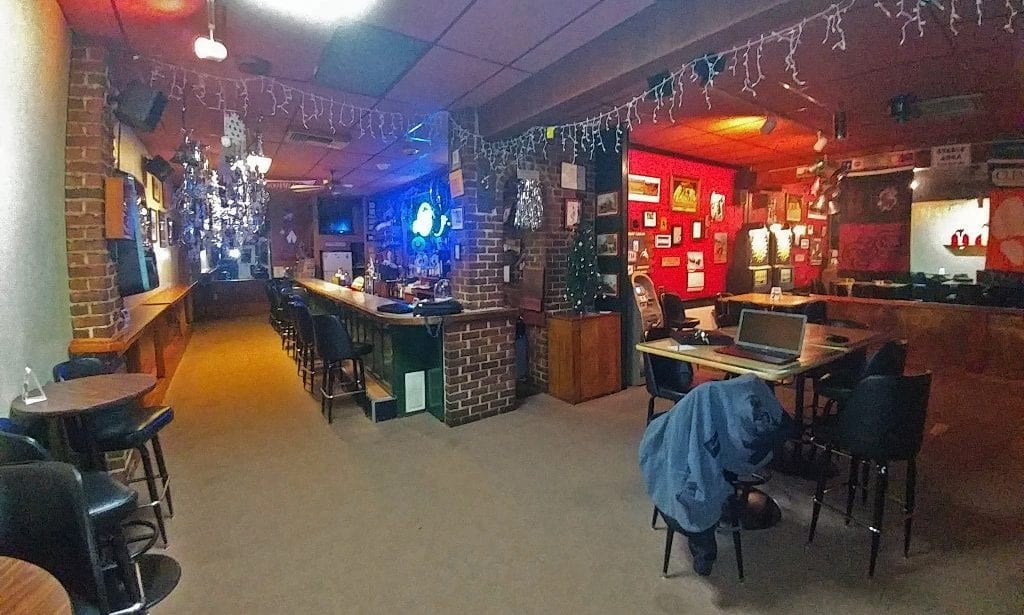 Outside of tech, what are your other interests or hobbies?

Locksport is probably my biggest hobby outside of work these days. I like to get new locks to try to pick, and learning to pin and maintain locks to me is fun. I like to tinker with working on the car when I’ve got time, and I’d love to learn how to weld, but until we get 30 hour days, I don’t think I can take on much more.

First I’ve ever heard of Locksport. I’ll have to check it out! Any parting thoughts for folks considering PCs or trying to pour the perfect pint?

People in the market for a PC should look at the Lenovo T480, because I happen to know it’s a beast of a machine. To people trying to pour the perfect pint, quit rubbing the side of the glass—you look like a moron.