17 November 2011
RESEARCH TRIANGLE PARK, NC – November 17, 2011: Lenovo announced today the results of the 2011 Global Student Science and Technology Outlook, a multi-country survey that concluded students in emerging countries – India, Mexico and Russia – are prioritizing and pursuing science-related careers over students in developed countries, including Canada, Japan, the U.K. and the U.S. While virtually all (89 percent) of the respondents agreed that science is cool, only slightly more than half overall are considering pursuing careers in science, technology, engineering or math (STEM).

When asked if given the opportunity to take a trip to the moon or anyplace on Earth, just 43 percent in total chose the moon, although 62 percent of students in India polled said they would suit up for the ride. 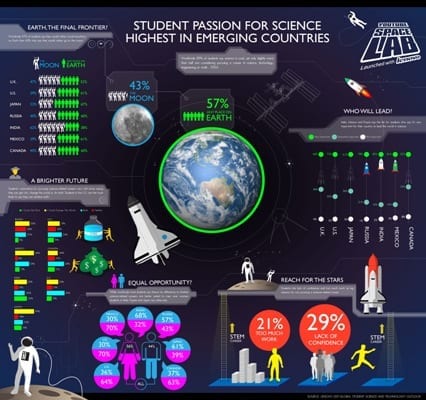 “These results are eye-opening in calling attention to the differences in how students around the world view science as a career aspiration,” said Michael Schmedlen, worldwide director of education, Lenovo. “While the study shows some interesting disparities, the outcomes suggest possible solutions for how to engage students and foster their passion for science. As the world’s #1 PC-maker in education, we believe programs like our partnership with YouTube Space Lab will do this by providing world-class judges as mentors along with phenomenally cool incentives like astronaut training and technology prizes.”
Interest Varies by Nationality
Important to Lead the World in Science
Science More Important Than Arts
Shortage of Scientists Influences Career Choice
Pursuing Science, Technology, Engineering or Math
Aspirations to Change the World
Removing Barriers & Inspiring Students
The study’s most encouraging finding reveals that a vast majority of students say science is cool, however, only a slight majority responded that they intend to pursue a science/STEM-related career. The top reasons cited for those not pursuing this career type are a lack of confidence in their abilities and too much work/schooling required. Of interest, most students say they choose by middle school whether or not to pursue science and that their parents and teachers play a key role in shaping their decisions. The study also finds that access to technology factors into student interest. Most students report the laptop/PC as the piece of technology most influential in shaping their pursuit of science, followed by Internet access.
Space Lab Global Science Program
When it comes to exploring space, nearly all (approximately 80 percent) of students say they want to be a space tourist. To get them closer to that, Lenovo is partnering with YouTube on the YouTube Space Lab program, an online competition asking students around the world to submit an experiment that can be performed in zero gravity aboard the International Space Station (ISS). The winner/winning team’s experiment will be conducted in a live stream from the ISS in 2012 for the whole world to see while the winner/winning team also receives the choice of astronaut training in Star City, Russia or a trip to Tanegashima Island, Japan to watch their experiment blast off into space.
Survey Methodology
RedShift Research surveyed 4,800 students online between Oct. 28 and Nov. 1, 2011, in two categories: high school (14-17 years old) and full/part-time university students (18-22 years old). Overall, completed responses totaled 800 per country in the U.S., U.K. and Canada, and 600 per country in India, Japan, Mexico and Russia with conclusions and key observations noted at the 95 percent level of confidence.
About Lenovo
Lenovo (HKSE: 992) (ADR: LNVGY) is a $US21 billion personal technology company serving customers in more than 160 countries, and the world’s second-largest PC vendor. Dedicated to building exceptionally engineered PCs and mobile internet devices, Lenovo’s business is built on product innovation, a highly-efficient global supply chain and strong strategic execution. Formed by Lenovo Group’s acquisition of the former IBM Personal Computing Division, the company develops, manufactures and markets reliable, high-quality, secure and easy-to-use technology products and services. Its product lines include legendary Think-branded commercial PCs and Idea-branded consumer PCs, as well as servers, workstations, and a family of mobile internet devices, including tablets and smart phones. Lenovo has major research centers in Yamato, Japan; Beijing, Shanghai and Shenzhen, China; and Raleigh, North Carolina. For more information see www.lenovo.com.
[ssba]