On a bright spring day in San Francisco, eighth-grade girls gathered in the library of the Dr. Martin Luther King, Jr. Middle School. Beyond the usual books, sets of virtual reality headsets lay across round tables—one for each student. Outside, a bright mural on the school’s wall features Dr. King, Rosa Parks, Mohandas Gandhi, Chief Joseph of the Nez Perce, and others—seeming to invite students to couple education with compassion and advocacy.

Riding a similar aspirational wave, three organizations joined forces to create a singular, immersive virtual reality workshop for students at the school. Not everyone can access the depths of the ocean, but VR provides an extraordinary analogue—including the way a headset can mirror a diver looking through their mask.

“Sometimes it’s almost an abstract thought when you think about things like climate change or over-fishing or marine pollution,” said Erika Woolsey, the marine scientist who founded the Hydrous to inspire passion and preservation for an ocean very much in peril. “VR as a tool can make things more concrete because it can transport you, it can make an issue seem psychologically and physically closer.”

Woolsey partnered with Amber Zertuche at IGNITE Worldwide, a non-profit dedicated to increasing STEM access and opportunities for girls. Zertuche identified the right school for Woolsey and her Hydrous collaborators—including diver and Stanford University student Andrea Contreras—to take kids on a virtual dive through the ocean. Lenovo sponsored the event and brought along Mirage Solo headsets for the students to use.

Many students were initially distracted and even skeptical about the merits of the workshop. Few of them were interested in marine science or STEM careers, at least before the VR experience began. The students, watching the Hydrous film IMMERSE, instantly gasped in surprise, laughed, pointed in wonder at sea turtles, and encountered firsthand the devastation unfolding across coral reefs.

See more in the video above, and read more about the Hydrous’s efforts here and the role of Lenovo’s technology here. 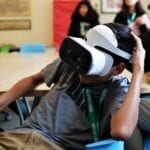 How can dedicated outreach, intensive community-building, and the latest tech strengthen the confidence of children of immigrants? 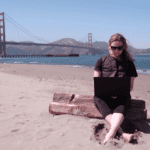 What gear gives marine biologists reliability and power as they work near saltwater and sand while crunching ocean-scale data?