Unpacking the Eco-Friendly Future of Packaging

It’s not every film you stream from your sofa on a weeknight that leaves a lasting impression on you or changes the way you work. But one documentary inspired me to pay more attention to the thing customers give the least thought to after buying a product: the packaging.

We’re all used to recycling our cardboard, but that’s not the only material that goes into the packaging of the products we buy – often plastic is used in some form too, typically to laminate or seal boxes as well. The amount is growing too; in 2015 in China alone, courier companies used a total of almost 17 billion meters of adhesive tape, a figure which has only increased as demand for home delivery has too.

Now multiply that for every industry and country across the globe. When I watched the movie ‘A Plastic Ocean’ I was shocked; the truth is of all the plastic, 79 percent goes in the ocean or the earth, 12 percent is burnt, and only nine percent can be recycled.

In other words, just recycling and using recycled cardboard for boxed products isn’t enough. We need to eliminate the plastic from them too. That requires radical thinking – a challenge we as people should always be up for.

Packaging is often overlooked in the life cycle of consumer electronics, but in truth is a large part of the product offering, when measured by mass and energy footprint – not least because in practice it is often immediately discarded.

It’s also something that companies dedicate entire divisions to, and never stop thinking about. To give you an example, our packaging engineers have recently eliminated plastic adhesive tape from the bottom of the packaging of select ThinkPad product lines – by introducing boxes that close and secure themselves.

This would prove to be no small challenge: plastic tape has been a crucial part of heavy packaging since long before the advent of the laptop, after all. It’s how products stay secure and undamaged as they’re transported all over the world. Finding a solution to avoid its use and keeping the product protected would not only offer cost benefits but allow for a more environmentally friendly approach to packaging.

But after several iterations, we solved it: the new ThinkPad box design deploys a self-locking structure, with two tongues at the bottom and matching lock holes to seal with more stability and security. It’s just as strong as a taped box, and similar in cost too.

At scale, even small changes like this can make a huge impact on a business’ overall footprint and sustainability. ThinkPad products required 54 tons of one-time use plastic tape for box closures every year until 2018 – 12,100 miles of it, enough to wrap halfway around the earth’s equator. Now we use significantly less.

It’s a win-win situation for consumer and companies alike, and not only means less plastic is used, but more cardboard is recycled, since separating plastic tape from a carton box is a serious challenge at recycling plants.

But simply reducing our reliance on plastic in packaging isn’t enough. Other materials once considered essential in packaging and shipping are fair game for sustainable innovation too.

Take polystyrene – the global polystyrene market was valued at $42.7 billion in 2019 by ResearchandMarkets.com, and predicted to grow to $62.3 billion by 2023. It doesn’t have to. Wherever possible, we now use molded pulp, fiber and low-density polyethylene (LDPE) in favour of traditional polystyrene packaging, made from scrap foam.

Lenovo is also mindful of the fate of the packaging it produces in turn: in some the end customer receives an optional returnable bulk packaging service, where the packaging materials can be sent back to be reused for new shipments. It’s all part of our commitment to closing the loop – that is, keeping any materials used and reused in a cycle that minimises waste. Close more boxes with less plastic, make more boxes with renewable, sustainable materials, and we can all help close that loop. 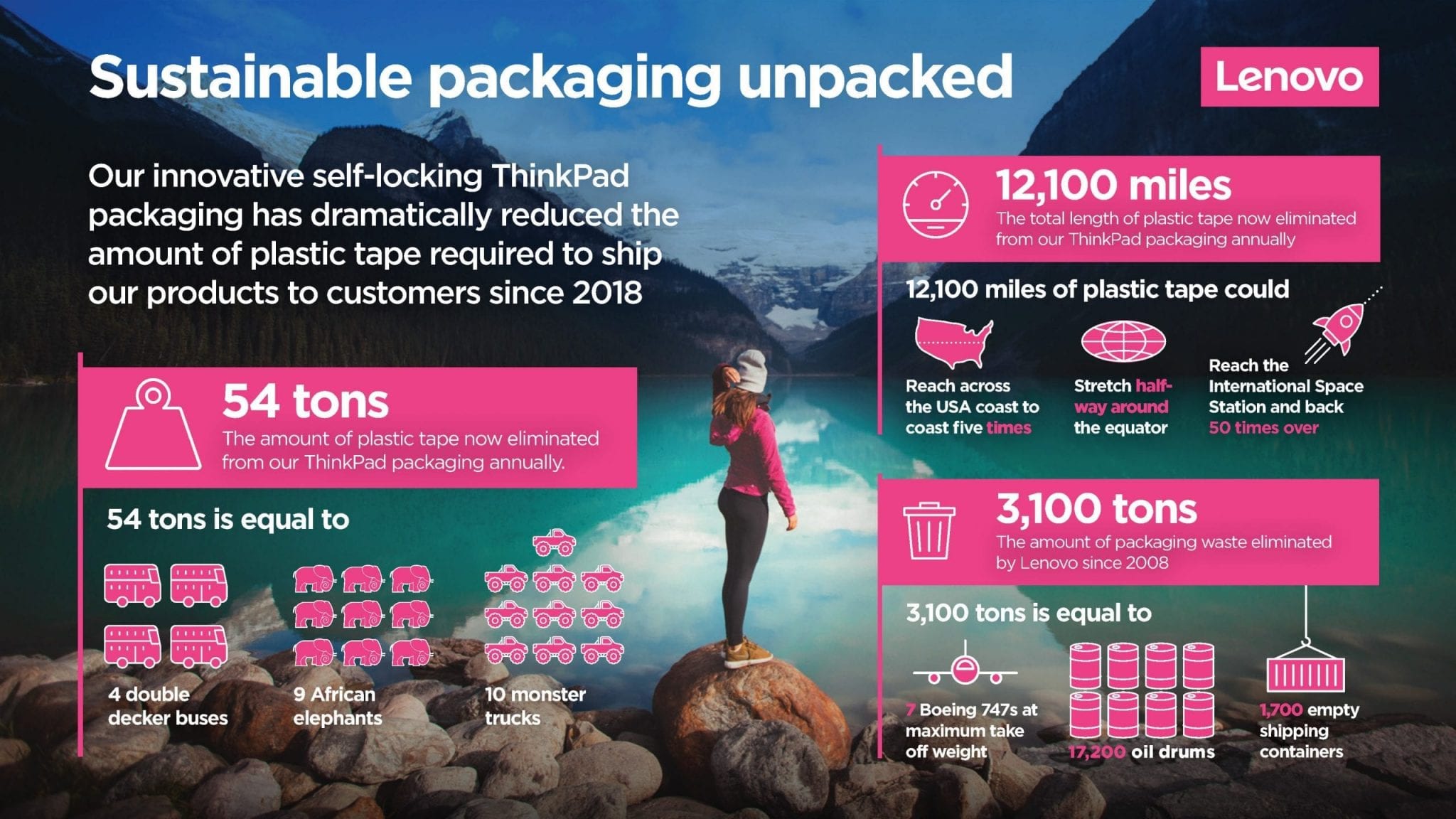 Taking cardboard out of the equation, too

The self-closing box is just one of Lenovo’s many green initiatives dating back over a decade that have saved over 3,100 tons of packaging waste (or the equivalent of more than 500 African elephants in weight) so far.

Lenovo began using 100 percent recycled packaging material in 2008, and now requires its own supplier to meet minimum standards for use of recycled materials. More recently, the company has also begun replacing other materials from the packaging in some ThinkPad product lines too. Beginning in 2018, the Lenovo ThinkPad X280 has shipped with thermoformed cushions made from bamboo and sugarcane.

Why bamboo? It’s among the fastest growing plants in the world, grows all year round in China, creates no toxic waste in the manufacturing process and is rapidly renewable and totally compostable.

It also requires less volume, enabling more PCs to be stacked together. Lightweight packaging also has the benefit of lowering carbon emissions created in transit – you can simply stack more in a pallet (18 percent more, in fact), so fewer trips are needed, resulting in a 6.7 percent efficiency improvement in CO2 emissions. The material has since been rolled out to the ThinkPad X390 and X13 lines, and will shortly be introduced in the ThinkPad X12 tablet, too. 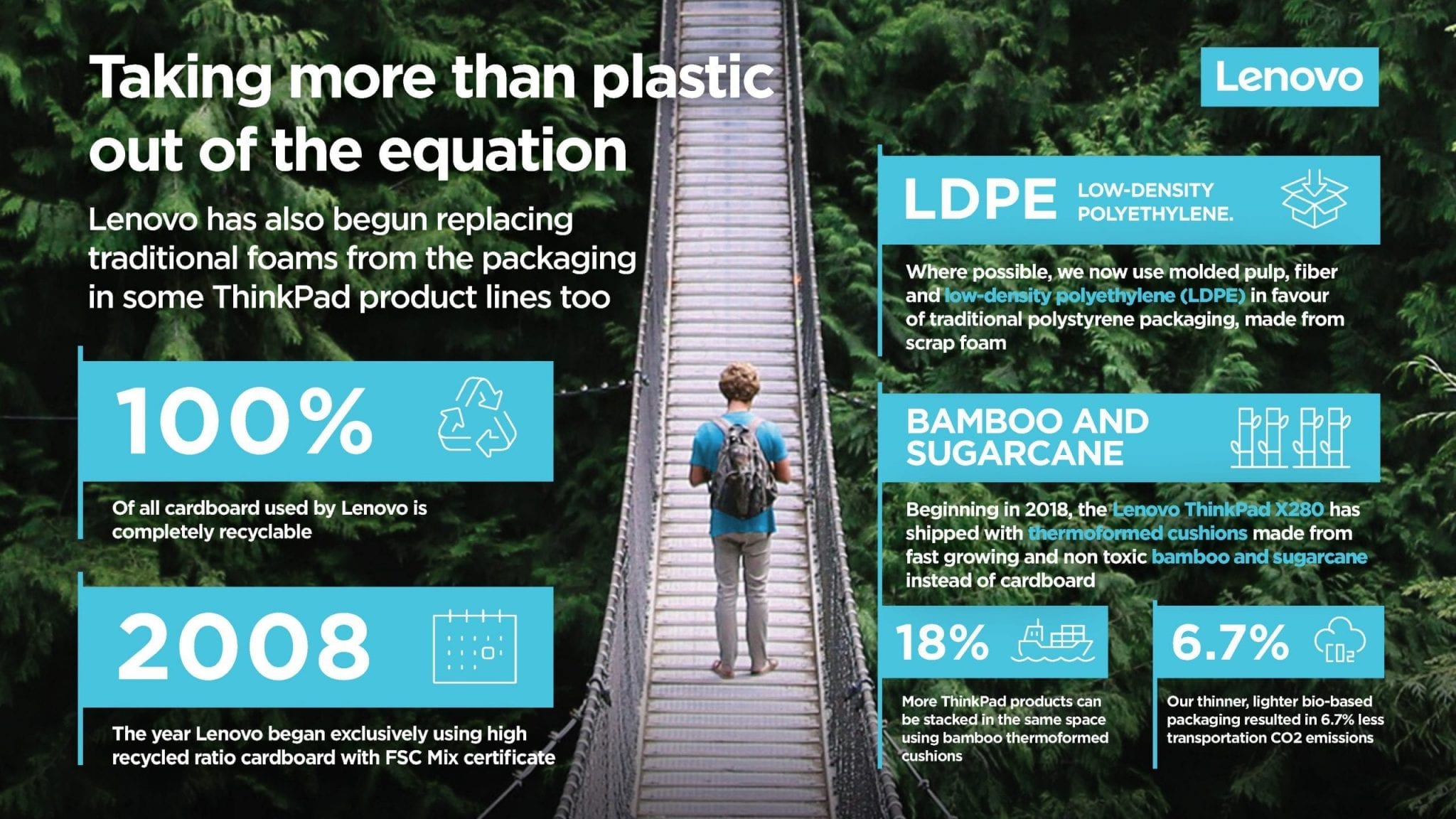 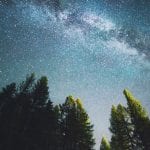 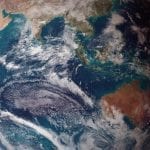