The eye blinks at a speed of 300 milliseconds, a rate so fast, the human brain barely registers the rapid-fire opening and closing. In the 2018 MotoGP season opener, Ducati’s Andrea Dovizioso snagged first place by a stunning 27 milliseconds — a rate nearly 10 times faster than the blink of an eye.

Besides Dovizioso’s undeniable racing skill, it’s hard to argue with the power of his Ducati Desmosedici GP18, the latest in a series of exceptionally fast racing motorcycles that Ducati has been perfecting for nearly two decades. And the bikes keep getting faster. Last year, Dovizioso accelerated his Desmosedici to eye-watering speeds upwards of 215 miles per hour — three times faster than a cheetah can run. To spectators, Dovizioso’s bike appears as but a red blur hovering across the asphalt.

MotoGP bikes seem to defy the natural laws of physics with their incredible power-to-weight ratios. The two-wheelers must clock in at 346 pounds to meet sporting regulations, but contained within their carbon-fiber frames are 1,000cc engines with more than 250 horsepower.

To mere mortals, riding such a fast-moving beast is unthinkable. One must not only keep his body perched atop the metal machine — an act that requires immense physical strength — but also pilot the bike through hair-splitting turns, all while keeping its tires glued to the road. This is where technology comes into play.

MotoGP bikes are no longer mere repositories of automotive technology. With the advent of the technological revolution, the bikes have since morphed into Internet of Things-enabled devices that seamlessly provide the racer and his pitstop team with countless gigabytes of information, relaying intel about everything from the bike’s gear changes to the stickiness of the track. Some see a Fourth Industrial Revolution dawning for transportation technology.

Ducati, long a leader in motorcycle innovation, recognizes this. In an effort to keep its factory riders atop the podium, it looked beyond the confines of its Italian headquarters. In April 2018, the MotoGP racing arm of Ducati announced a multiyear partnership with Lenovo. The technology giant has since provided Ducati with high-performance computers and servers, helping the motorcycle company push the sport of MotoGP into the future — a future that sees bikes getting faster, sleeker and safer. 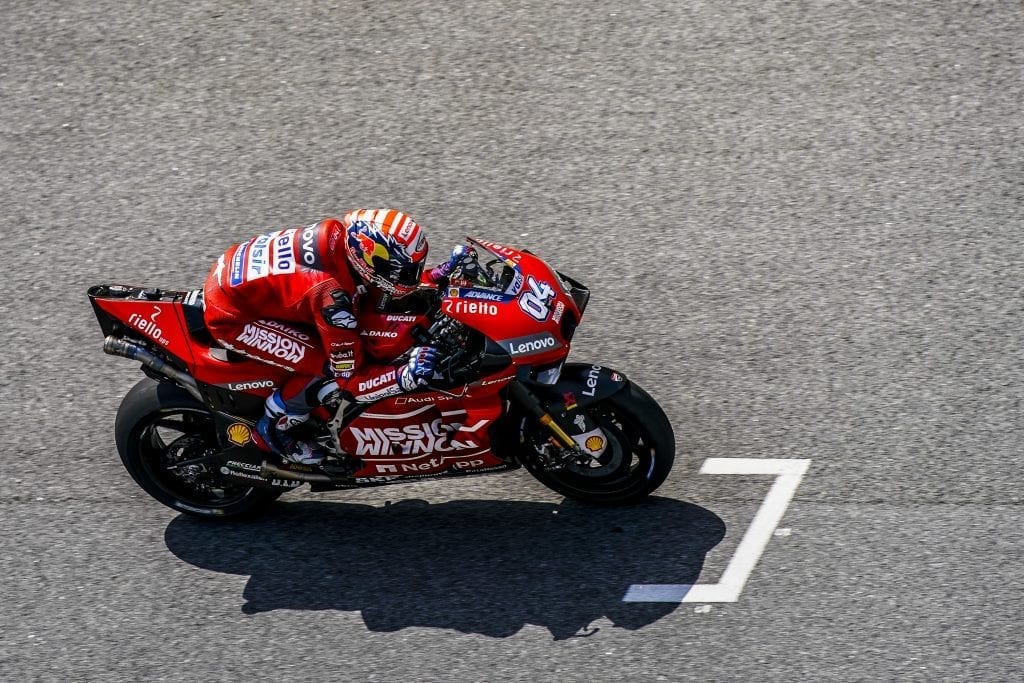 The grueling Qatar course of the 2018 season opener, where Dovizioso just barely snagged a first-place win, has 16 turns. To edge around these corners without falling or spinning out their bikes, riders must rely on the invisible centrifugal force created when vehicle meets turn. MotoGP bikes have special asymmetric tires of soft rubber that facilitate the connection between track and bike, but the rider must also lean into each corner, skimming his knee and elbow above the ground to counter the speed and force of the bike. Before the mid-1970s, the rider wouldn’t dare let his body make actual contact with the course (at least intentionally).

The ease with which Ducati’s MotoGP team can navigate these sharp turns is in part thanks to the increased computing power available to the riders. Data gleaned from sensors and transmitted to Lenovo ThinkPad P1s off the track allow the teams to provide comprehensive feedback to their riders, such as the optimal lean angle and the required speed to round a corner. In the last five years, racers have achieved lean angles as low as 64 degrees, an impressive feat thanks largely to the feedback from bikes’ sensors, harvested both during races and test runs.

A powerful engine can be a double-edged sword when it comes to cornering, braking and accelerating, explains Stefano Rendina, Ducati Corse IT Manager. Maintaining power on the ground without losing tire grip is especially difficult.

Fortunately, since 2018, Lenovo has provided Ducati “with the best technology on the market,” Rendina said. It’s allowed Ducati staff like him to use “digital intelligence” that enables bikes to achieve things that would have been impossible only  10 years ago.” And they’ve done so without compromising rider safety —  Ducati’s “top priority.”

Technology has enabled such advancements in a number of ways. Beyond providing teams with data from the track — and the servers required to securely store it — computer modeling systems enable Ducati to develop comprehensive simulations that can predict and simulate the behavior of a bike before its wheels ever touch the track.

Rendina says Lenovo has enabled a merging of “physical and virtual spaces.” The better a team’s technology, the better their simulations, and the better bikes and riders can potentially perform.

ThinkPad P1s are especially well-suited to the job, with their ultra-vibrant 100% Adobe color gamut and 400 nit displays — a technicolor digital world. Like Ducati’s Desmosedici, the computer balances power and performance with six physical cores and 12 threads equipped with a thermal design power of 45-watts.

By modeling races back at the test factory, riders can hypothesize what their rides will look like on the track, and designers can tweak the bikes accordingly. Take the Qatar course. The main straight is over a half-mile in length, while the entire loop has a tricky mix of corners that require a combination of medium and high speeds. If a team has any hope to place a rider on the podium — let alone keep him safe on the track — they must find the right configuration of the bike’s gear shifts, traction control and stability systems to ensure it can tackle the straightaways, as well as the barrage of fast and wide turns.

MotoGP racing, however, is a visceral, physical sport. What can be modeled in the virtual realm can’t account for the specific conditions on race day, nor the talents of each racer. What’s first recreated on a computer takes on a life of its own when tire meets the materiality of the track.

“As important as having the best technology is, the performance of the rider remains critical,” Rendina said.

Perhaps more essential than developing the bike’s technological capabilities is empowering the racer to make the split-second decisions required of him in a race.

These decisions, says Rendina, “can have life-altering consequences.” No matter how advanced the technology becomes, the racing experience cannot — and should not — be fundamentally altered, he says.

“Even the most trailblazing technology remains just a tool. It is the human using the tool that makes the difference.”