Iesha Landis learned to code in 3rd grade. Now 11 years old, she’s in 5th grade, and stepping up her game. Recently, she coded a Sphero, making the robot talk, change colors, and roll.

“It’s like writing a play, but for the computer,” she said.

Her big aspirations measure high against her small stature, but after a conversation with her, you’ll have no doubt she’s seriously invested in making her mark in engineering.

As an African American girl, Landis’ mom, a teacher, knows giving her daughter access to information and opportunities is one the most important things she can do to encourage her to pursue her goal – becoming a biomedical engineer.

“Professional athletes have been groomed since they were 3 or 4 years old so if we want our daughters to be professional in the computer world, it’s the same to me. It’s going to take going to programs like this, going to companies like this where she has that experience so it’s not foreign to her as she progresses,” said Kimberly Landis.

That’s where Black Girls Code, Lenovo, and employees like Shadia Garrison step in to help. As part of Lenovo’s Global Month of Service, Lenovo hosted a coding event at its offices in Morrisville, NC to give African American girls in elementary, middle, and high school both role models and to teach them how to code. The project of the day? Addressing the thematic issues of fairness and inclusiveness in AI and more practically, learning to program code to draw faces by recognizing emotions. Lenovo engineer Shadia Garrison mentored Landis for the day-long session by sharing her experience as a female African American engineer and her engineering skills.

I like volunteering and giving back. It’s important for them to see someone who looks similar to them. I want to show young black girls that they can go to college. If I can do it, you can do it, and you shouldn’t limit your options.

Here’s her story. As the youngest of five children, Shadia Garrison, gets her competitive drive by wanting to keep up and even surpass the accomplishments of her three sisters and brother. She has a natural aptitude for both Math and the Liberal Arts. So when it came to college, she studied both. When she considered dropping engineering from her double major, her Mom advised against it. She listened.

“My mom really pushed me. Go for the engineering. I know you can do it. It was hard, but it was worth it. I’ve always liked numbers. Industrial engineering is about looking at processes. Whenever you think about how you buy something, I think about the process it takes to get to you. I’ve always thought about processes and the most optimum way to do things. It’s just how I think.”

WISE (Women in Science and Engineering) and WMEP (Women and Minority Engineering Program) are minority programs at NC State helped her during her pursue of her Industrial Engineering degree. It helped connect engineering students from underrepresented groups, so they would be able to take classes together and provided a support structure.

One of my really good friends is a Hispanic girl in Industrial Engineering, and often in classes we’d be the only people of color, but we’d say hey, at least we’re doing this together.

“When you’re younger you don’t really realize there’s a lack of girls in engineering. What I did was just my normal. I didn’t see a lot of people like me doing it, but I didn’t realize there was such a need.”

Just a few months later she became a full-time Lenovo employee, part of our Data Center Group Global Supply Chain Rotational Program, working as a global supply chain engineer. Gregarious when you meet her, Garrison’s effervescent personality quickly makes an impression, bucking the typical stereotype of ‘engineer.’ That suits her well for her focus on customer quality, making sure Lenovo’s largest customers are satisfied from delivery through product end of life and helping to make she her story and skills help others like Iesha Landis follow in her footsteps and carve their own unique path. 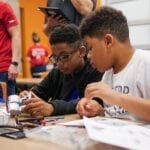 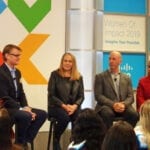 Sharing the Power of Encouragement and Mentoring for Women in Tech

Lenovo technology leader Ruth Sleeter shares her insights about advancing women in STEM careers at industry diversity event When it comes to making women and other minorities more comfortable in technology workplaces, leaders need to own their own biases. That was one of the takeaways from Lenovo Executive Director Ruth Sleeter as she and other […] 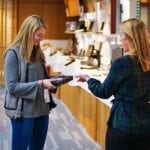